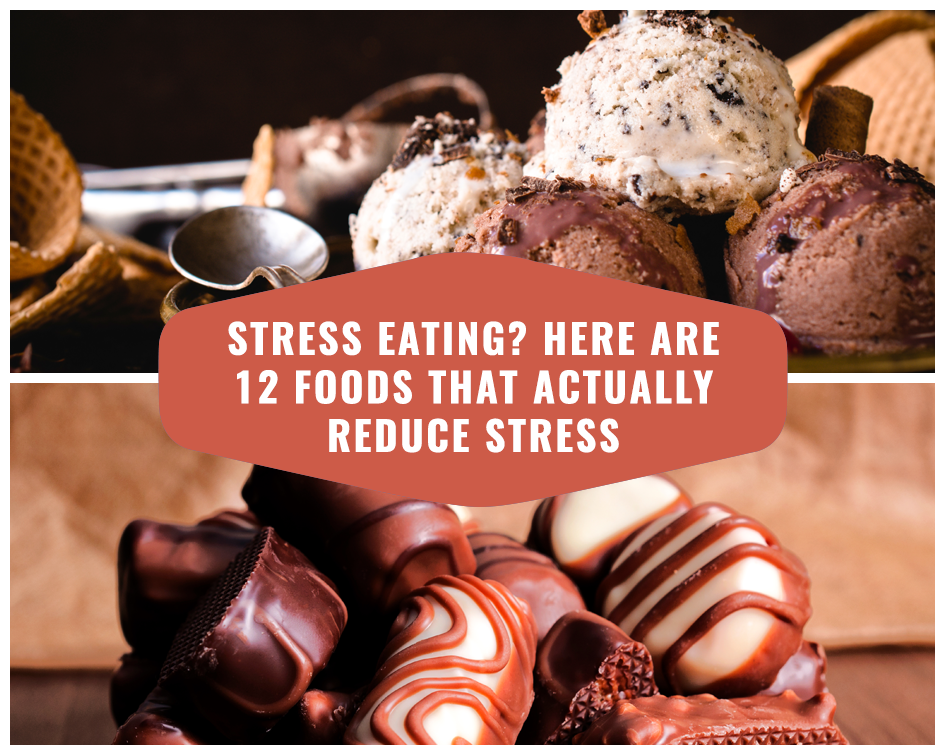 Stress can be the enemy of a decent diet – “stress eating” is totally a thing – and we all fall victim to its gluttonous tendencies at some point. Short-term stress can actually inhibit appetite; adrenaline coursing through your system activates the “fight-or-flight” response, wherein your body’s like, “Oh hell no, digestive system. You’re not using any of our resources until we’re out of this mess. TAKE A SEAT.”

But when your body perceives longer-term stress, levels of cortisol – a hormone produced by the adrenal glands – stay elevated. And cortisol is like, “Hey! I see we’re in a stressful situation here. You’re going to need some energy. EAT ALL THE THINGS.”

That’s great, but much like your grandma who still uses a rotary phone, this response is a little behind the times. Though it gets the job done, it’s a mechanism that began when our ancestors were literally fighting during animal hunts and stuff (I mean, spearing woolly mammoths probably burned tons of calories) – not sitting on the couch angrily scrolling through Facebook.

Of course, scarfing down a pint of ice cream or some greasy fries makes us feel better in the moment, but it does nothing positive for our bodies. So not fair. All the junk circulating around in our systems can cause sluggishness, erratic spikes in blood sugar, irritability, and more — on top of the stress we’re trying to combat in the first place. And I don’t know about you, but I get pretty pissed off when my pants stop fitting.

The good news is, there are alternate ways to fight stress with a diet that will actually benefit your bod. The bad news is, they’re nowhere near as fun to eat, but hey – we can still meet up with Ben & Jerry once in a while on the sly.

It’s not the sexiest of snacks, but a hearty bowl of oatmeal gives you slow-digesting complex carbs that make you feel satisfied. Stir in a handful of antioxidant-rich blueberries and a drizzle of honey to take care of that sweet tooth.

I’m slipping this in here as someone who equates giving up junk food with torture. Good thing the market is saturated with treats like Halo Top, Arctic Zero, and Enlightened that give you that ice cream feeling without the guilt. Because sometimes there’s no better stress relief than sinking face-first into a freezing pint of goodness.

Bananas are high in potassium, which lowers blood pressure, and B6, which is a proven mood-booster. Maybe try slicing some into that oatmeal!

Walnuts, pistachios, and almonds are great sources of Omega-3 fatty acids, which are linked to lower rates of depression. They also contain tons of B-vitamins (see banana description), mood-elevating selenium, and are crunchy AF.

When you eat spicy food, your tingly tongue signals the brain to release feel-good endorphins that help the body deal with the pain. If you don’t wanna go full beast mode and chomp a chili pepper, try a spicy stir fry or something.

There are tons of herbal tea blends designed specifically to soothe, plus there’s just something cozy about sipping on something warm. The very act of not spilling scalding-hot liquid into your crotch requires a steady hand, so even if you’re in full-on freakout mode, you’ve got to calm yourself before you take a drink. Works like a charm!

You can grab a juicy orange, grapefruit, or pineapple, which are full of immune-boosting vitamin C (the immune system can be compromised by stress, which can make you feel even more like crap). But you could also just sniff a lemon: citrus contains a chemical called linalool which is widely used in aromatherapy because it has been shown to quell stress and improve the sense of wellbeing.

Spinach, kale, broccoli, and asparagus are brimming with folic acid, a member of the B vitamin family that helps the body produce neurotransmitters that regulate mood. So eat your greens! Or don’t, I’m not your mom.

If greens aren’t your bag, try a different type of green: avocado. It’s also rich in folate and contains healthy, appetite-satiating fats. And as a bonus, you can eat it with something crunchy. As if we needed an excuse to eat more guacamole.

Speaking of excuses to eat more of something, dark chocolate is practically medicinal. We have shown that eating it regularly – not inhaling an entire heart-shaped box of Russell Stover, mind you, but just a couple pieces a day – reduces levels of stress-related hormones.

It’s strange to think that the bacteria in your gut can affect the activity in your brain, but science is weird. Gut bacteria increase levels of dopamine and serotonin, which are the very hormones elevated by antidepressant medications. And yogurt is chock full of probiotics that help keep that gut bacteria thrive. Eww … but yay?

Carbs? Check. Sugar? Check … if you spread a little honey or jam on top. Whole grains are also high in folic acid (are you sensing a theme here?), and the complex carbs will answer your body’s call for steady energy.